In 1997, 33.9 million people globally were forcibly displaced by war, persecution or violence each year, compared to 65.6 million in 2016 and “it remains at a record.” (United Nations Refugee Agency – UNHCR).  Some 11 million people were newly displaced in the course of last year – fleeing wars, violence or persecution. These were individuals who were forced to flee their homes to escape persecution, war or severe human rights abuses. Often, they can never return home and about one third are officially recognized as refugees.

Research commissioned in 2019 by UNHCR in Canada shows that refugees are creating jobs for themselves and other Canadians, with almost 1 in 7 refugees self-employed or business owners. Refugees are on average just over 11 years younger than those born in Canada, which means they are more likely to be of working-age, with many years to contribute. Notably, the research proved that 20 years after being resettled to Canada, refugees were contributing more in income tax than they received in public benefits and services.

Who is a refugee?

A refugee is someone who has been forced to flee his or her country because of persecution, war or violence. A refugee has fear of persecution for reasons such as race, religion, nationality, political opinion or membership in a particular social group. Most likely, they cannot return home or are afraid to do so. War and ethnic, tribal and religious violence, sexual orientation and gender violence are leading causes of refugees fleeing their countries.

Refugees must qualify for entry under Canada’s laws and must pass medical and security checks before they can come to Canada.

What types of refugees does Canada recognize?

Refugees arrive under one of four (4) different categories as defined below:

Under the GAR Program, refugees are referred to Canada for resettlement by the United Nations Refugee Agency (UNHCR) Individuals cannot apply directly. Individuals must register for refugee status with the UNHCR or state authorities to be considered by a referral organization.

A GAR’s initial resettlement in Canada is entirely supported by the Government of Canada or the province of Quebec. This support is delivered by non-governmental agencies called service provider organizations funded by IRCC, of which ISSofBC is one. GARs receive support for up to one year from the date they arrive in Canada, or until they are able to support themselves, whichever happens first.

If an individual is a PSR, it means that a group of people in Canada have volunteered to help the individual adjust to life here once resettlement has taken place. The sponsorship group will assist the individual with finding a place to live, financial support, social and emotional support and food and clothing. The sponsorship group also agrees to support the PSR for one year after they arrive or until they can support themselves, whichever comes first.

The BVOR Program matches refugees identified for resettlement by the United Nations Refugee Agency (UNHCR) with private sponsors in Canada. Key features of the program are as follows:

A person in need of protection is a person in Canada who cannot return to their home country safely. This is because if they return, they would be subject to:

How many refugees arrive to Canada?

In 2019, 107,800 refugees were resettled to 26 countries with or without UNHCR’s assistance, including 30,100 to Canada.  The Canadian government sets an annual target for resettling refugees in the various categories. In 2019, 19,000 arrived through the Private Sponsorship of Refugees Program.

In 2018, Canada resettled the highest number of refugees and had the second-highest rate of refugees who eventually gained citizenship. Canada accepted 28,100 of the 92,400 refugees who were resettled across 25 countries that year. This includes refugees coming in through a number of available channels. Since 1959, Canada has resettled over 700,000 refugees

Canada has three different resettlement programs. Of the resettled refugees that arrived in 2019, 29% were Government Assisted Refugees (GARs), 67% were Privately Sponsored Refugees (PSRs) and 4% arrived with the Blended Visa Office-Referred Program (BVORs).

How many refugees arrive to British Columbia?

In 2017, British Columbia saw a 64% drop in the number of Government Assisted Refugee (GAR) arrivals in comparison to 2016. On the other hand, Settlement Orientation Services (based in Vancouver, B.C.) saw 76% increase in the number of Refugee Claimant arrivals to B.C. in 2017 compared to 2016. In terms of housing, 48% of GARs permanently reside in Surrey, with 17% residing in Burnaby in 2017 while 38% of Refugee Claimants found permanent or temporary housing in Vancouver, with the second top location being Surrey at 18%. Looking ahead, Canada’s Multi-Year Immigration Levels Plan shows an increase in the targeted number of Privately Sponsored Refugee arrivals, approximately exactly double the target in comparison to GARs for each year from 2018 to 2020.

How many refugees are expected to be resettled in 2020?

Canada’s strong humanitarian tradition continues with plans to settle over 30,000 refugees in 2020. Canada’s continued commitment to refugee resettlement will reinforce Canada’s positive contribution to refugee protection internationally. Outlined in this plan are targets for refugees and protected person arrivals to Canada.

To enhance the integrity of Canada’s borders and asylum system, Budget 2019 invested $1.18 billion over five years and $55 million per year ongoing to allow IRCC and its partners to process up to 50,000 asylum claims per year. 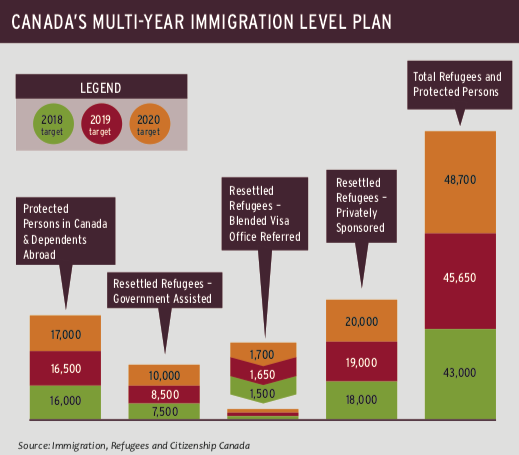 What support do Government-Assisted Refugees receive?

Government-Assisted Refugees (GARs) are refugees who are selected from abroad and resettled to Canada, arriving as permanent residents. The federal government is responsible for their selection and initial settlement in Canada. For example, GARs are eligible for federal government income support through the Resettlement Assistance Program (RAP) for up to one year after arrival.

Canada provides income support under RAP to eligible refugees who cannot pay for their own basic needs. Support can include a:

The level of monthly financial support is generally based on the prevailing provincial social assistance rates in the province where the refugees settle. Financial support can last up to one year after a refugee arrives in Canada, or until they can support themselves, whichever occurs first.

What support do refugees arriving under the Blended Visa Office-Referred program receive?

The BVOR program is a combination of the GAR and PSR programs with The Government of Canada giving up to six months of income support and the private sponsors give another six months of financial support. They also give up to a year of social and emotional support. For more information on this unique program, click here.