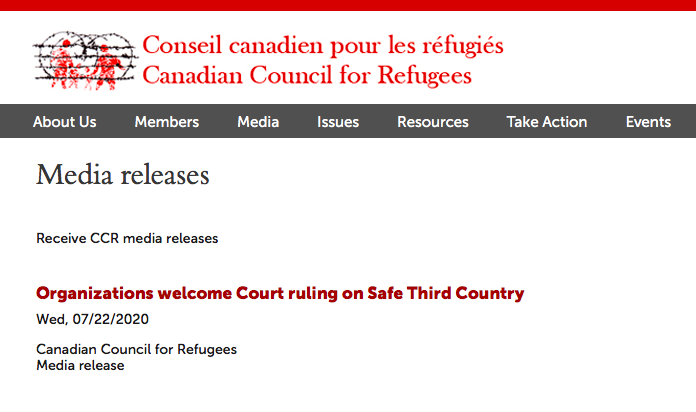 The Canadian Council for Refugees (CCR), Amnesty International (AI) and The Canadian Council of Churches (CCC) welcomed today’s Federal Court of Canada ruling that sending refugee claimants back to the US under the Safe Third Country Agreement violates the Canadian Charter of Rights and Freedoms.

“We asked the Court to look at the impact of the Safe Third Country Agreement on women, men and children who can’t find safety in the U.S. and to assess the legality of Canada sending them back to detention and potential deportation to persecution,” said Dorota Blumczynska, CCR President. “The Court could hardly fail to be moved by the testimonies of the appalling experiences of people in the US immigration detention system, after Canada closed the doors on them. Their experiences show us – and convinced the Court – that the U.S. cannot be considered a safe country for refugees.”

The Court found that sending refugee claimants back to the U.S. violates their Charter right to liberty and security of the person because many of them are arbitrarily detained in the US in immigration detention centres or county jails, often in atrocious conditions and in clear contravention of international standards.

The Court has suspended the effect of its decision for six months to leave time for Parliament to respond. Given that the Court has clearly set out the ways in which detention in the U.S. violates people’s fundamental rights, the organizations call on the Government of Canada to immediately stop sending people back to the US under the Safe Third Country Agreement, and not to appeal the decision.

“While the Federal Court has provided the government with six months leeway, it is imperative that Canada immediately end the return of claimants to the US,” said Alex Neve, Secretary General, Amnesty International Canada. “The Safe Third Country Agreement has been the source of grave human rights violations for many years, unequivocally confirmed in this ruling. That cannot be allowed to continue one more day; and is of even greater concern now given the prevalence of COVID-19 in immigration detention in the United States. Canada should further revoke the Order in Council which practically closes the border to refugee claimants as part of Canada’s COVID-response.”

“The Canadian Council of Churches has long advocated that every human being who is physically present in Canada has a legal right to life, liberty and security of person under the Charter of Rights and Freedoms,” said Peter Noteboom, General Secretary of The Canadian Council of Churches. “The U.S.-Canada Safe Third Country Agreement stands in the way of guaranteeing those legal rights.”

Under the Safe Third Country Agreement, implemented in 2004, refugees who present themselves at a Canada-U.S. border post seeking to make a refugee claim in Canada are, with limited exceptions, denied access to the Canadian refugee system and immediately returned to the United States. Since the Agreement does not apply to people who cross into Canada other than at an official border post, people in need of safety in Canada have been crossing in significant numbers in between ports of entry. Withdrawing from the Agreement would not only ensure that Canada meets its legal obligations, but would also allow people to present themselves in an orderly way at ports of entry, ending irregular crossings.

Decision of the Court: https://decisions.fct-cf.gc.ca/fc-cf/decisions/en/item/482757/index.do

Backgrounder: Why the US is not safe for refugees: challenging the Safe Third Country Agreement

Training Webinar: Refugee/Asylum Claims – National and Local Updates from UNHCR Canada and Immigration and Refugee Board of Canada (IRB) 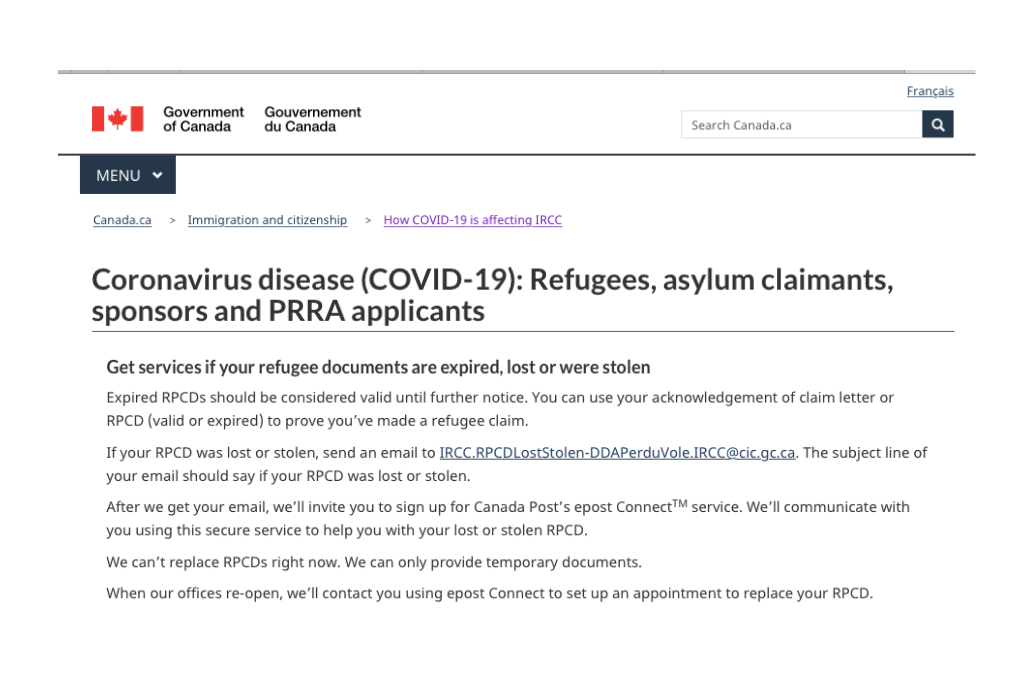